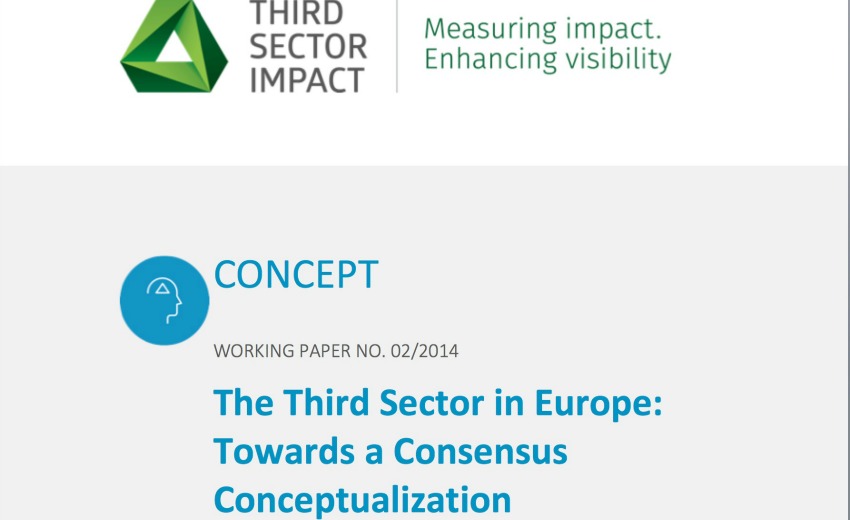 WP 2: Towards a common conceptualization

We are pleased to announce the second TSI Working Paper “The Third Sector in Europe: Towards a Consensus Conceptualization” by TSI researchers Lester M. Salamon and Wojtek Sokolowski.

A common conceptualization is an important milestone towards measuring the third sector in Europe as “there remains a kind of conceptual ambiguity” about the “manifold types of entities that co-exist in the third sector” (FP7 tender under which the TSI Project is operating). The achievement of conceptual clarification is a key objective of the project.

This working paper reports on the progress that TSI has made toward this objective. It presents a consensus definition of the third sector that builds upon a bottom-up investigation of European experiences with various third sector concepts and a vigorous set of discussions among project partners and outside stakeholders. The resulting conceptualization takes account of a number of critical European particularities and covers both institutional and individual manifestations of the third sector concept while still providing a basis for systematic comparisons among European countries and between them and countries in different regions.

To explicate this proposed conceptualization and how it was developed, the discussion here falls into five sections. Section 2 describes the basic challenge that the project faced in developing a coherent, common conceptualization of the third sector that could work in the various European regions. Section 3 outlines the strategy that the project employed to find its way around these challenges toward such a consensus conceptualization. In Section 4 summarizes the major conclusions that emerged from the fact-finding and discussion processes undertaken in pursuit of this strategy. Section 5 presents the key elements of the consensus definition of the third sector that resulted, focusing first on the defining features of the institutional components of the third sector and then on the defining features of the individual behavior components. A final section outlines the next steps that the project plans to undertake to move toward the development of basic data on the third sector so conceptualized.

Four more-of-less distinct clusters of entities or activities emerged from our bottom-up review process as candidates for inclusion within our consensus conceptualization of the European third sector in whole or in part: (i) nonprofit organizations; (ii) mutuals and cooperatives; (iii) social enterprises; and (iv) human actions such as volunteering and participation in demonstrations and social movements that are undertaken without pay. However, not all of the entities in each of these clusters seem appropriate to include within a concept of the third sector. This is so because many of them significantly overlap with other institutional sectors i.e., government, for-profit businesses, and household activities – from which the third sector must be separated. This mapping exercise thus made it clear that formulating a consensus definition of the third sector required finding a way to differentiate those elements of these institutional components that are “in-scope” from those that are “out-of-scope” by virtue of being for-profit businesses, government agencies, or household activities.

Policy Brief
TSI has also issued a policy brief on defining the third sector in Europe. It has been distributed to EU and national policy-makers, third sector networks and practitioners.

We are eager to hear your feedback at

Previous Reading
TSI Working Paper Series No. 1: “Methodological Guideline For Impact Assessment”
Next Reading
First TSI Policy Brief: Defining the Third Sector
What are you interested in?
Content keywords
Countries
Menu
CONSULTATIONSWhat is Third Sector Impact?
Working areas
TSI Community Project Coordinator Advisory Board Consortium National Stakeholders European Stakeholders
Who is concerned with the third sector? Are you a practitioner? Are you a policy-maker? Are you a researcher? Are you a statistician? Are you a journalist? Are you a citizen?
Sitemap