Calling the third sector an “important economic actor” in its April edition of monthly bulletin Insee Premiere, the National Statistics Institute of France (INSEE) acknowledges the role of cooperatives, mutuals, associations and foundations. Combining those entities under the headline “third sector” approximates TSI’s definition of the the third sector as consisting of “private associations and foundations; non-­commercial cooperatives, mutuals, and social enterprises; and individual activities undertaken without pay or compulsion primarily to benefit society or persons outside of one’s household or next of kin”.

The article refers to the fact that the social economy employed 9,9 percent of salary earners in France in 2008, not considering the 16 million volunteers and people working within the third sector on contracts shorter than 30 days or less than 120 days per year. It lists mutual banks, insurance companies and umbrella organisations like the French Red Cross as the large employers in the field. The sector provides nearly 70 percent of all jobs in social services and more than half in care for the elderly and in rehabilitation centers across the country. 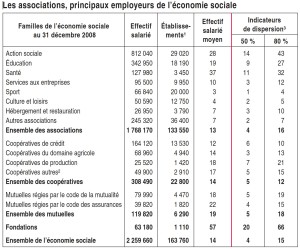 The third sector is also strong in agriculture, where cooperatives employed 65.000 people in 2008, particularly south of the Massive Centrale. INSEE shows the types of actvities by regions: in the south employment is high to provide social, educational and health care services to the local population. In some areas cooperatives, mutuals, associations and foundations are even first
local employers. The more industrialised North leaves less room for third sector activities.

Warning: Invalid argument supplied for foreach() in /usr/home/thirdsectorimpact.eu/web/site/assets/themes/TSI/classes/class.theme.php on line 418

Previous Reading
EESC’s Various Interests Group underlines important role of civil society dialogue
Next Reading
European Civil Society Day on 16 June, 2015
What are you interested in?
Content keywords
Countries
Menu
CONSULTATIONSWhat is Third Sector Impact?
Working areas
TSI Community Project Coordinator Advisory Board Consortium National Stakeholders European Stakeholders
Who is concerned with the third sector? Are you a practitioner? Are you a policy-maker? Are you a researcher? Are you a statistician? Are you a journalist? Are you a citizen?
Sitemap